What is the best handgun cartridge and bullet design for you to carry on the street?

My standard response to this question is to carry the largest caliber, with the heaviest bullet, loaded as hot as you can handle it in order to deliver two, quick center of mass shots … and have the skills to be able to follow up with a precise shot to the cranio-ocular cavity (between the eyebrows and moustache) when the first two thoracic cavity hits don’t stop an extremely dedicated opponent.

This week’s report brings bullet design theory, ballistic gelatin testing, and the realities (and variables) of shooting a dedicated human opponent all together for your experience and education …

The first photo I want you study is the terminal ballistics of various handgun cartridges when shot into ballistic gelatin. 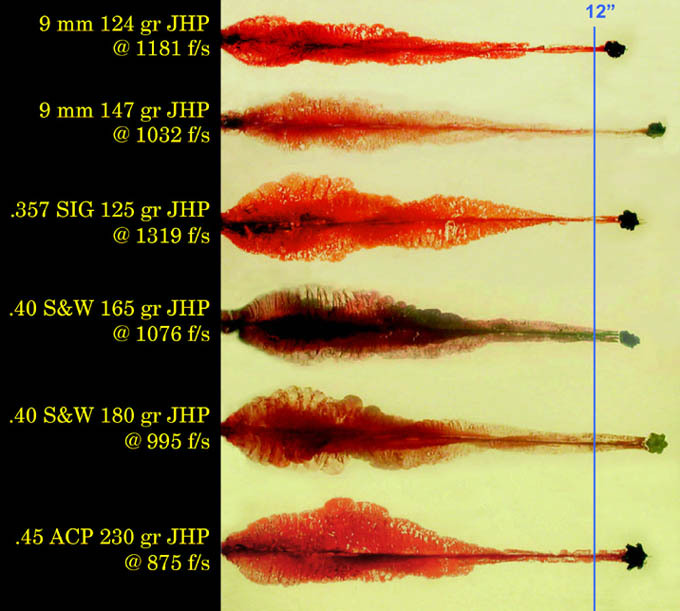 Ballistic gelatin is designed to approximate, as closely as possible, the terminal resistance that a bullet encounters when it strikes human flesh. Unfortunately, ballistic gelatin does not have bone structure, joints, nervous system reaction, circulatory hydraulic reaction, movement, or the will to fight. These are just a few of the variables encountered when you use a gun against a human adversary.

Note that every cartridge tested penetrates over 12 inches, but take a look at the wound channels. Do you see a difference?

The bigger the wound channel, the more damage and the more likely you are to adversely affect bones, joints, the nervous system and circulatory hydraulics — all of which lead to incapacitating your opponent so he stops fighting. Clearly the larger calibers perform best.

Who would chose a 9mm over the larger, more powerful calibers? Our military servicemen have been asking that question ever since the government switched from the proven, battle tested 1911 in .45ACP to the Beretta 9mm. Sometimes, decisions are made based on factors other than what works best …

From this photo, if you are choosing a concealed carry handgun simply on the merit of what works best in ballistic gelatin, then the best choices are clearly defined.

However, in a real gunfight, you can throw all of the theory and ballistic gelatin testing out the window, because MINDSET and TRAINING trumps equipment every time. And I’m referring to the mindset and training of both YOU and YOUR OPPONENT.

On the street, he who hits first with the most, wins. Shot placement is EVERYTHING. A disciplined and dedicated fighter with any weapon is superior to Joe Average Citizen who just took a one day CCW Course at his local gun range but does not have the mindset or ability to finish the fight.

Want proof? Take a look at this report from the FBI after some misinformation regarding an officer involved shooting was disseminated on web forums.

Note that the National Tactical Officer’s Association Blog Post was in error regarding the performance of the handgun rounds and thus created the FBI investigation and their subsequent report.

Here is the very interesting and educational FBI Report:

P.P.S. If you do not yet have a gun and the mindset to handle yourself properly in any situation involving a firearm, then get a Springfield Armory XD Pistol at no charge when you take advantage of the Greatest Course, Gun, and CCW Permit Offer in the firearms training industry. You will receive training that exceeds law enforcement and military standards without any boot camp mentality or drill instructor attitudes.